Ken Kohler was the Division Director at Rodgers Organs of St. Louis for the last 30 years. We recently lost Ken to complications from cancer. He will be missed. In honor of his life and service, we thought we'd share his obituary with you:

He was born August 6, 1942 in Philadelphia, Pennsylvania, the eldest of two sons of Gertude Kohler (nee Gallagher) and Kenneth R., Sr. His father owned an industrial saw business, his mother was a group manager at Gimbels Department Store, and both were actively involved in ministry with the Grace Brethren Church. Mr. Kohler graduated from Central High School in Philadelphia in 1960 and then earned a degree in piano performance from Houghton College (NY) in 1968. He married Claire Jeanne Lotter in 1964. They met when he was 17 and she was 14. He was the organist at her church, Wissinoming Gospel Tabernacle.

After he graduated from college, he pursued Master’s work at the American Conservatory of Music in Chicago and served as a professor of music at Grace College (IN) and Bethel College (IN). Shortly thereafter, he left academia to become a sales representative for Rodgers Instrument Corporation, a career that lasted more than 40 years. In that position, he provided churches of all traditions and denominations organs and pianos for their worship services and assisted them in improving their music ministries. Since 1992, he served as Division Director at Rodgers Organs of St. Louis in Maryland Heights, Missouri.

Throughout his life, Mr. Kohler served the church as organist, choir director, and minister of music. He is remembered for his first-rate performances of hymns and sacred music on the organ and piano, as well as organizing major productions, such as church musicals and contatas for Christmas and Easter. Friends and long-time acquaintances especially enjoyed church services where he took requests from the congregation and played a medley of favorite hymns and choruses, seamlessly weaving them together and building to a grand finale.

In addition to his lifelong commitment to the local church and various missionaries in the United States and abroad, he was a supporter of the Heritage Foundation, the Alliance Defense Fund, and various pro-life organizations. He enjoyed classical music, talking about politics, working with the dogs that his wife trained for the CHAMP Assistance Dogs organization, and taking extensive vacations with his wife in their RV. In addition to his example of faith and fatherhood, his children remember him for his sharp dressing, carpentry skills, love of sweets, and he and his wife’s hospitality to their children’s friends. Several lifelong friends of the family identify him as a surrogate father figure and someone who always opened his life and home to them.

In addition to his wife, he is survived by his three sons and daughters-in-law; Jillian and Franz Kohler of O’Fallon, Kasia and Vaughn Kohler of Dardenne Prairie, and Jessica and Lance Kohler of Louisville, KY; three grandchildren, Jackson (7 yrs), Lila (1 yr), and Catherine (1 yr), and one brother, John Kohler of Winona Lake, IN. He also loved the dogs in his life: Hogan, Jake, Bozy, Ranger, and Rudy.

The family would like to thank the staff at SSM Cancer Care at St. Joseph’s West in Lake Saint Louis, especially Drs. Peter Montgomery and Pascale Salem, for their excellent and compassionate care.

In addition, they wish to commend the paramedical team with St. Charles County EMT, as well as the officers of the Lake St. Louis Police Department for their competent and sensitive assistance at the time of his death. 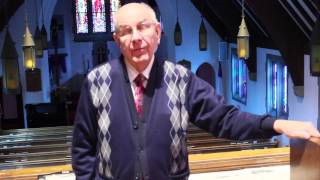 How can a Rodgers Organ be an orchestra on its own?

Trinity Lutheran: A historic church that made a SOUND choice!